PARIS — The reviews read like pleas for help from inside a failing corporation. “A terrible and toxic place to work.” “A culture of fear and intimidation.” “Morale is at an all time low.”

But this is not an ordinary company. The scathing critiques were posted, anonymously but publicly, by more than a dozen current and former employees of U.S. Soccer, the governing body for the sport in the United States, on a networking website. More than a dozen have been created over the past two months, as U.S. Soccer has moved into the final stages of its search for a new chief executive. Seven have appeared since the start of the Women’s World Cup on June 7. 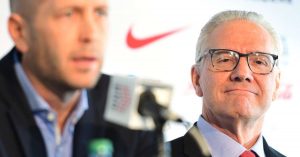 In telephone interviews with The New York Times, several current employees at various levels of seniority confirmed that the feelings expressed on the site, Glassdoor, accurately reflected concerns inside the federation’s Chicago headquarters.

What the reviews suggest, as the United States women’s national team chases another world championship in France and the men’s side pursues a regional one, is a behind-the-scenes revolt against the federation’s most powerful executives, notably its longtime chief executive, Dan Flynn, who plans to retire this summer, and his top deputy and potential successor, Jay Berhalter. 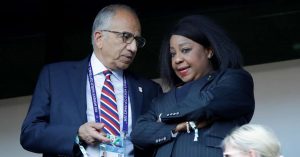 © Alessandra Tarantino/Associated Press U.S. Soccer’s president, Carlos Cordeiro, with FIFA’s secretary general, Fatma Samoura, at the World Cup. Cordeiro, elected last year, is leading a restructuring of the U.S. federation.
…………………………………
The reviews began appearing in May, suggesting a concerted effort to use the site’s company review option — which is public — to alert top federation officials, and the organization’s board, to concerns before they vote on a new chief executive.

In the reviews, and in interviews with The Times, past and present U.S. Soccer staff members described grievances common to almostanycompany: too much work, too little pay, bosses who don’t listen. But in their open disdain for Flynn and Berhalter, the employees also paint the portrait of an organization — one still emerging from a broad restructuring sparked by the humiliation of missing the 2018 World Cup — that is dominated by a small group of long-serving executives, and infected by dissatisfaction and mistrust.

“Dream job, nightmare organization,” read one post added a week ago. “Intervention needed” was the title of another. “Terrible leadership,” said a third.
One current employee called the postings, which are an open secret inside the federation’s headquarters, “cathartic.”

“It’s like a desperate cry for help,” the employee said in a telephone interview. The employees contacted by The Times agreed to speak only on condition of anonymity, out of fear of retribution from the federation’s leadership team.

Several employees said the reviews were motivated by the looming change in leadership. Flynn’s desire to retire from the chief executive post he has held since 2000 has been public knowledge for months, and recent news media reports suggest the search for his successor is nearing an end. Berhalter, the federation’s chief operating officer and the brother of the men’s national team coach Gregg Berhalter, has emerged as a leading candidate to replace Flynn, perhaps as soon as next month.

U.S. Soccer’s president, Carlos Cordeiro, said he and other senior officials, as well as federation board members, were aware of the online postings, but he declined to comment publicly on anonymous complaints.

He noted the federation was undergoing some of the biggest changes in its recent history, adding staff members and increasing the diversity and responsibilities of the organization’s leadership. And a U.S. Soccer spokesman, in a statement, acknowledged that “at the moment we are at an inflection point where we are rapidly growing as an organization, which is both rewarding and challenging.”

“As we grow,” the statement continued, “listening to our employees and taking action where and when needed will be more important than ever.”

At U.S. Soccer’s Chicago headquarters, where most of the federation’s nearly 200 full-time staff members are shoehorned into a 150-year-old stone mansion, employees said they or colleagues had left recently — or were actively searching for new jobs — for a variety of reasons: better opportunities, better hours, better pay. But several cited the workplace culture as part of their decision-making.

“You are losing a lot of great people,” reads one review. “How can you not see that?”

“Prepare yourselves for a mass exodus after the Women’s World Cup,” reads another.

Several of the reviews directly blame Flynn, U.S. Soccer’s chief executive since 2000, and Berhalter, the federation’s top commercial officer, for a workplace climate in which employees’ arrivals and departures are monitored, 50- to 70-hour work weeks are expected and those with dissenting or unpopular opinions are reprimanded or marginalized.

Others lamented that advancement inside the federation is limited by a core group of top executives who have controlled the most senior positions for a decade or more.

But it is the public — and personal — rebukes that paint the most troubling picture of a troubled workplace:

■ “We are okay with nepotism here,” one review said, mentioning both Berhalters by name.

■ “Executives are more interested in what benefits them rather than ‘making soccer the preeminent sport in America.’”

■ “Morale is at an all time low in all the years that I have worked here. Have you noticed? Do you care? Will you continue to do nothing?”

The search for Flynn’s successor has been conducted largely out of public view, by a committee of board members led by Cordeiro. More than a dozen internal and external candidates have been considered, but with little information leaking to the public, the perception has grown that the process is being managed to arrive at an arranged result that puts Jay Berhalter in charge.

That is precisely why some inside U.S. Soccer say they have tried to raise an alarm.

“We all know that if the next CEO comes from within,” one wrote, “the toxic culture will never change.”