The arrests of the three other Minneapolis police officers connected to George Floyd’s death and the upgraded charge against former officer Derek Chauvin is just the beginning for Floyd’s family. Justice, for them, includes convictions.

“We have to have justice. They murdered him in broad daylight in front of everybody,” Floyd’s brother Philonise told CBS News correspondent Jeff Pegues.

The charge against Chauvin, who pressed his knee into Floyd’s neck while he was handcuffed and pleading for air, was upgraded to second-degree murder, while the other officers were charged with aiding and abetting murder.

But Philonise said he believes the killing was purposeful and wants Chauvin to face the most serious charge of first-degree murder. 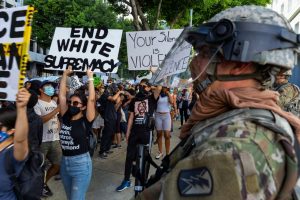 “When you look at that guy, when he was on his neck, and they was pleading for his life like ‘please, please, just let him breathe, get off of him, get off of him,’ he was just looking at them like they was in a cage or something, like you can’t get to me,” Philonise said.

In announcing the decision Wednesday, Minnesota Attorney General Keith Ellison said the charges are the first step. He asked the public for their confidence even though history has shown the challenges of prosecuting police officers.

“Every single link in the prosecutorial chain must be strong. It needs to be strong because trying this case will not be an easy thing. Winning a conviction will be hard,” Ellison said.

But Attorney Benjamin Crump, who is representing the Floyd family, said he believes the video will make it clear to any jury.

“We have an expectation of justice. We can never stop believing that we will get equal justice,” Crump told Pegues. “I believe we will get a conviction in this case … I absolutely do. This video is horrific.”

The initial complaint against Chauvin sheds light on what happened the day George Floyd was killed.

According to the complaint, Officer Thomas Lane asked Chauvin if they should roll Floyd on his side after Floyd said he couldn’t breathe several times. Chauvin answered, “No, staying put where we got him.”

One minute after Floyd became unresponsive, Lane again said, “…want to roll him on his side?” Officer J. Alexander Kueng then checked for a pulse and said, “I couldn’t find one.”

At the site of George Floyd’s memorial and at protests across Minneapolis, news of the new arrests spread quickly. Hundreds of protesters chanted, many with their fists raised in the air.

With the charges behind them, Philonise just wants everyone to remember his lovable big brother.

The county medical examiner released its full autopsy report Monday with the family’s permission. It does not list asphyxiation as a cause of death, but it does say Floyd had tested positive for COVID-19 just over two months ago. He was most likely asymptomatic. (Courtesy: CBS News/msn)