PT Usha is an icon for women athletes. Without the shadow of a doubt, she is one of India’s greatest athletes to have graced the sport. Her blistering pace at the track never ceases to amaze us during her stint as a prolific runner. That’s why she is rightfully called the ‘Queen of Indian Track and Field’. She is referred to as ‘Payyoli Express’.

The legendary athlete’s on-field contributions are well known as she has won 101 International medals so far. She made the entire nation proud by chipping in with gold medals which is the most by any female athlete in the single track event – 100, 200, and 400-meter sprints, the 400-meter hurdles, and the 4 x 400-meter relay at the 1985 Asian Track and Field Championship in Indonesia.

PT Usha created iconic history by becoming the first ever Indian women to reach the finals of an Olympic event before she won the Semi-Finals in the 1984 Olympics in Los Angeles. Payyoli Express won the Golden Shoe award for the best athlete in the 1986 Seoul Asiad. She was rightly honoured with Padma Shri and the Arjuna award in the year 1985.

USHA SCHOOL OF ATHLETICS
After calling it quits from athletics, P.T. Usha came up with an initiative of establishing ‘Usha School of Athletics’ in 2002. She started this school because she wants to train young athletes with an intention of winning Olympic Medals for India. She offers free training, shelter and food for the budding young talents.

She believes that India has a great future for ‘athletics’. She has taken to crowdfunding and raised over a whopping Rs 20 lakhs in a bid to train young talents at her school in the hope of turning them into potential contenders for Asiad and Olympics. She has to raise a sum of Rs 27 lakh for 16 athletes. The crowdfunding campaign has ended on the website ‘Milaap’ but contributions are still welcome.

P.T. Usha currently trains 16 students who live in the residential campus and it takes anywhere between Rs 3-6 lakhs per year to train an athlete. The students sweat it out day in day out regularly. The day sets off in the early morning at 5:30 AM and the students will assemble at the running ground by 6:15 AM.

Their morning court session lasts 3 hours till about 9:30 AM and after that, the students attend school till 4:30 PM. Then in the evening, training session starts from 4:30 PM to 6 PM. “Athletics is our focus, but our kids also pursue a formal education at nearby schools and colleges. Some of them scored above 90%,” Usha was quoted as saying by Times of India.

“In the past, celebrities like Mohandas Pai and Kumari Shibulal came forward to sponsor five to six athletes each; Sudha Murthy was kind enough to give us Rs 20 lakh once. Our mud track was donated by the state government and the synthetic one by the Centre. Our hostels were built by Sobha Developers,” Usha said. (by Sagar Abhinandan)

Life story of superwoman P.T. Usha- the only Indian lady to win over 100 international awards 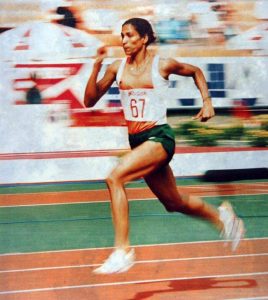 Whenever we hear ‘P.T.’ it reminds us of two things. One is Physical Training at school and the other is P.T. Usha. She was born on 27 June, 1964 and hailing from the town of Payyoli in Kozhikode, Kerala, Pilavullakandi Thekkeparambil Usha is one of the greatest Indian athelete to have ever graced the sport.

P.T. Usha might have called it quits from ‘Track and field’ 17 years ago but she will forever remain in our hearts for the fructifying contributions she had done for the welfare of India. P.T. Usha is quite often referred to as “Queen of Indian track and field” and is nicknamed as the Payyoli Express.

Gone are the golden days when the 80’s and 90’s kids used to admire P.T. Usha to the core. She is known for the knack of lighting up the track at a blistering pace as she is a potential sprinter by trait. P.T. Usha has over 100 international medals to her substance.

The ‘Golden Girl got the national recognition during the 1979 National School Games, where she successfully clinched the Individual Championship. P.T. Usha is also the youngest Indian sprinter to enter the Olympic foray, Usha was just 16 when she made her debut at the 1980 Moscow Games. Though she was eliminated, she won our hearts.

Picking lessons on the go, in the same year, she came to the fore once again by winning 4 gold medals in the 1980 Pakistan Open National Meet at Karachi. Two years later, she won a gold medal in 200m race and bronze medal in 100m race in the world junior invitation meet which is currently called World Junior Athletics Championship at Seoul.

She stole the spotlight during 1984 leg of Olympics in Los Angeles where she aced the 400 m hurdles heats. She set an iconic Asian record that reads 55.42 seconds which is the best even now. She finished fourth and missed finishing third by a whisker of 1/100th of a second.

She was unstoppable on her path to success as she won 2 bronze medals at the 1998 Asian Track Field meet in Japan and also set a new national record for the 200m race, managing to beat her own previous record set by her before. She currently holds the world record for the most gold medals earned by a female athelete in a single track meet.

Much to inking as much as exuberance on the track, she was named the sportsperson of the century and the sports woman of the millennium by the Indian Olympic Association. She announced her retirement in the year 2000 and after that, she opened the Usha School of Athletics where she spends as much as quality time to nurture the young prospects. (by Chaithanya G)///(Source : The Youth India)